Polk Audio, a company renowned for their prowess in audiophile gear, has today announced during the E3 conference in Las Vegas, the new Polk Audio Striker Pro gaming headset, a beauty in and in itself. When we first heard about the Striker Pro, we were expecting its price to jump above the $1000 mark, like Sony’s in-ear headset and new Walkman designed for audiophiles. But much to our surprise, the Striker Pro gaming headset is quite affordable for what it has to offer between $130 and $150.

The Striker Pro gaming headset is made for ALL the gamers out there. Regardless of what console you prefer, be it Xbox, PlayStation, PC or mobile, you will be able to customize your experience with the headset accordingly. That means that if you want to use the headset with an Android or iOS device, you can choose the included cable that has in-line microphone and controls and of course, high quality audio eliminating crosstalk. If you want to use the dedicated, certified Xbox version, you will attach its own controller cable to the Xbox and you can instantly mute and control volume without having to use on-screen controls. If you have the PlayStation 4 version in mind, the Striker Pro will come with an attenuator to adjust mic gain so that there are no distortions during gaming. 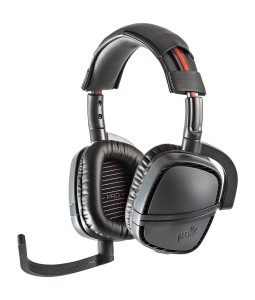 The PC connect cable is an almost 10 foot long Pro PC cable that is designed to lower noise floor and eliminate crosstalk, all the while boosting mic clarity, so that everyone can understand what you’re yelling while gaming. Of course, the Striker Pro gaming headset is designed with audiophiles in mind, which is why its price is a bit steep in comparison to regular gaming headsets. Nonetheless, Polk Audio has a few features built-into the headphones that justify its price, aside from its many proprietary cables and functions.

The Striker Pro gaming headset prides itself with unique high quality acoustics, tailored for gamers and audiophiles by the best audio specialists in the company. The Striker Pro comes with a patented Dynamic Balance driver design so that its output is fine-tuned and delivers a balanced, high-quality audio experience to gamers and otherwise. Since it is designed for both mobile and gaming use, so to speak, you will be able to make and take calls using the in-line mic controls, all the while benefiting from top-notch music playback.

Striker Pro for Xbox One

The removable omni-directional microphone with which the Striker Pro gaming headset is outfitted comes with its own push button that you can use to mute your mic when gaming or when you need to abruptly yell at your dog for once again destroying your favorite slippers. In the package of the headset, you will get three detachable cables and two removable microphones for your convenience. The Xbox One certified Striker Pro comes with a wireless adapter, so you won’t have to deal with wires either. The PlayStation 4 victory red Striker Pro headset costs $129 while the Xbox One dark emerald Striker Pro price is $149, and they will go on sale in September.