Allview isn’t the most popular company, especially not on the American smartphone market. Nonetheless, the OEM has released worthwhile phones in the Allview Soul line-up and today it has announced a new addition to that, the Allview Soul X2 Xtreme. Although its name is a mouthful, the device aims to be a flagship to surpass them all. Whether it succeeds in that will be revealed once reviewers get their hands on the new device.

The Allview Soul X2 Xtreme is a dual SIM smartphone that comes with Android 5.1 Lollipop out of the box, which puts it in the still rare category of smartphones that already have the latest version of the Lollipop operating system from Google. Under the hood, the device sports a Helio X10 64 bit octa core CPU clocked at 2.0 GHz, backed by 3 GB RAM and 64 GB internal storage. Allview included a microSD card slot in the phone after wide popularity of the port spurred controversy when the Galaxy S6 was launched without one.

The powerful processor and Android 5.1 Lollipop working together should result in a speedy user experience with near-stock Android on top, which might be very appealing to Android fans all over the world. Allview is known for making budget-friendly smartphones with a couple of compromises (most of the time the compromise involves the display and the battery life in our experience), so we’re curious to find out how this device handles real-life usage. 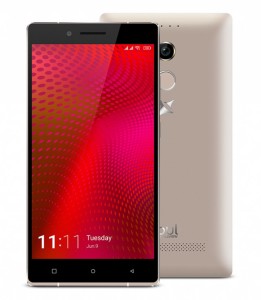 Since biometric sensors are as popular as they get, the company included one on the rear cover of the Allview Soul X2 Xtreme for secure unlocking and mobile payments with Google Wallet. The phone is outfitted with a massive 24 MP camera on the rear compete with high-intensity LED flash and 4K recording capabilities, as well as an 8 MP selfie camera on the front of the device. There aren’t any sample photos available, nor are there videos available, but the camera setup seems to be one of the best on the market. Whether the sensor is as good as Samsung’s Sony sensors will be revealed later on and we will update you guys on how that’s going.

The Allview Soul X2 Xtreme comes with a massive 6 inch display with a QHD resolution of 2560*1440, which means ppi pixel density is at almost 500 ppi, which is rather impressive. It seems like the company didn’t compromise on anything here, although many people would have appreciated a more well-known processor, like a MediaTek or Qualcomm one. There’s a pretty large 3500 mAh battery included in the package, which is said to last at least two days with moderate use. There’s an Extreme mode in the UI, which will save even more battery life, according to Allview.

You can already pre-order the Allview Soul X2 Xtreme for about $500 unlocked, which is amazing. Considering the fact that there’s a 24 MP camera on the rear, a 6 inch QHD display, an octa core 64 bit processor and Android 5.1 Lollipop on board, the Allview Soul X2 Xtreme price is really cheap. We’re wondering what kind of trade-offs will be noticed once people get their hands on the phone.